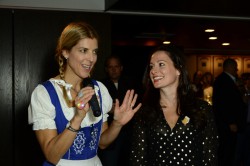 The Oktoberfest Committee was chaired by Melissa Levin and Erin McCall. They, along with United Way President Stuart Adelberg, recognized the generosity of numerous sponsors and the individuals and businesses who contributed over eighty items to the silent auction.  They applauded the dozens of volunteers whose enthusiasm and hard work made the evening an unqualified success.

Oktoberfest 2014 launched the United Way’s town-wide fund drive and its 80thyear of identifying and meeting local needs. The organization researches and documents the community’s human service needs, and works throughout the town with agency partners to coordinate efficient delivery of local health and human services. Greenwich United Way is in fact the Town’s largest non-government source of human service program funding, made possible by the annual community-wide campaign and special events such as Oktoberfest.

The Media Sponsor for the event was Serendipity magazine.

Giving to the annual community-wide fundraising campaign is the most effective and efficient way to support critically needed local services that strengthen children and families, support seniors, foster self-sufficiency, and assist individuals in crisis.

All photos by Bob Capazzo