The Greenwich United Way Sole Sisters marked their tenth anniversary April 23rd at Greenwich Country Club with a fundraising Luncheon and Boutique of olympic proportions. According to event co-chairs Diane Viton and Jill Weiner, over 350 Sole Sisters and guests attended. They enjoyed shopping for a good cause, a gourmet lunch, and being inspired by a talk on the ascent of women in business management and professional sports by Old Greenwich resident and Chief Marketing Officer of the United States Olympic Committee Lisa Baird.

Ms. Viton and Ms. Weiner, along with Sisters Initiative chairs Maxine Armstrong, Keri Cameron, and Lisa Lori, United Way Chair Karen Keegan, and President Stuart Adelberg all took to the podium to applaud the Sole Sisters over its ten year history as well as the organizers of the day’s record-breaking event. In remarking that since 2005 this group of women who “Step Up to Help Others Step Forward” has raised over $1.3 million, Mr. Adelberg said “as a community we have the ability to house, feed, clothe, and support the neediest of our neighbors, if each of us steps up as so many of the Sole Sisters typically and generously do.”

Lisa Baird offered real life examples, such as organizing a last-minute visit by Vladimir Putin at the Sochi Olympics, during her presentation “10 Tips For Being a Mentor.” During her six years of directing all sales and marketing, sponsorship, properties, media, events, and more USOC projects, she has raised the profile of Team USA, using her wide-ranging skills to launch a number of innovative marketing and digital media initiatives. Earlier, at the NFL, she was senior vice president of marketing and consumer products where she also directed the NFL-United Way marketing partnership.  For her accomplishments, she was chosen as WISE Woman of Year in 2011. The organization is dedicated to mentoring and growing women leaders in sports, a mission that parallels her own personal mission.

This year’s Luncheon proceeds will help the United Way to fund programs and services that assist those in our community who are struggling, in spite of their best efforts, to achieve economic security. During the year, the Sole Sisters are educating themselves about services and programs the United Way supports in this crucial area. In past years the group has focused on special service needs of children, youth, families, seniors, individuals in crisis, and the increased demand for basic human services as a result of the economic recession. 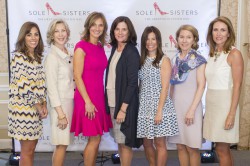